Since 2014, our incredible supporters have raised more than £100,000 for ACT.  Here are some of the projects we’ve funded to date.

• ACT is paying the modest basic fees for 25 children at Auxilium School, where Anna volunteered. This allows the very poorest children to stay at this wonderful school, encouraging them to get an excellent education and to move into further education and work. 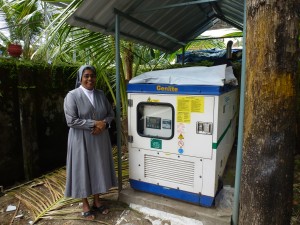 • The new generator we funded (pictured right, with Sister Mercy, Auxilium’s head teacher) has now been installed, to the delight and relief of all the children and staff. Power cuts are all too common in Kochi – often more than once a day – and since many of the school’s classrooms are windowless, it was impossible to carry on lessons. The ACT generator, a monstrous beast, can now power the school and orphanage, keeping the lights on, and the all-important fans spinning.

• At Prathyasha Bhavan Girls’ Orphanage, where Anna also worked, we have now re-fitted the top floor of the building (previously derelict) with new tiling and ceiling fans, and later this year hope to furnish it, so that it becomes a usable space for the girls who live there.

• A small group of our family and friends is also paying the monthly salaries for two care workers to help look after the younger girls at the orphanage. 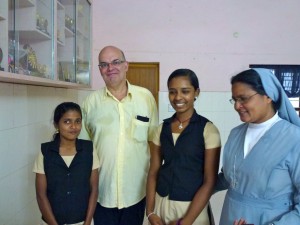 • The scholarship and medical funds we gave to the orphanage are being put to positive use. The two teenage girls pictured with Anna’s dad – and with the head of the orphanage, Sister Lisy – are now successfully studying design and tailoring, their college fees paid by ACT.

• Many girls have benefited from the funds we gave for counselling sessions, which take place in Trivandrum, five hours south of Kochi by train. The lovely nuns who care for the girls have persuaded a counsellor to offer her services for free, but had no money for transport, food or accommodation. With our help, the girls can now attend the sessions and gently get their damaged lives back on track.

• We have made a big difference to the lives of the children at SDPY School by tiling their large assembly ground, which doubles up as a playground. Previously, the area was a wilderness, dusty and dirty in the dry season, and a muddy swamp during the monsoon. You can see the difference in the pictures. 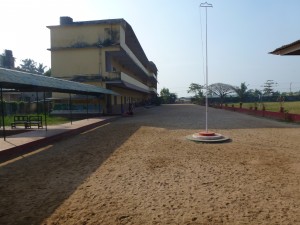 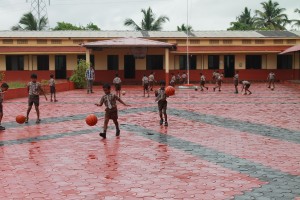 • At Cottolengo Special School, for disabled and special needs children, we have bought a new wheelchair for a young boy with cerebral palsy, and have set up a medical fund to pay for essential medicines for the children not provided by the government, for example, epilepsy drugs.

One of ACT’s largest projects so far is the re-housing of 12 families with young children in the slum area of Santhom, an area on the outskirts of Kochi. These desperately impoverished people were living in shelters made of cardboard and plastic sheeting, which invariably flooded and collapsed in the monsoon season. We have now replaced these with sturdy, weather-tight structures. Pictured are an original shack, and a few of the residents we have helped, at their new homes. 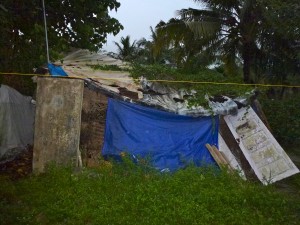 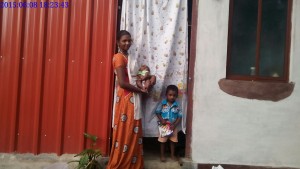 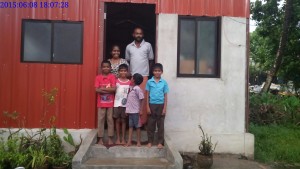 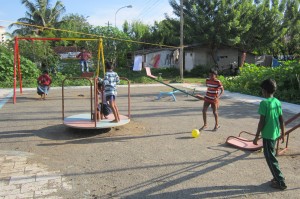 ACT’s next project at Santhom was to build a community playground for the many children who live in the area.  It may not look like much by Western standards, but it represents a huge improvement in the lives of these kids.

ACT’s next project focused on another Kochi school, the St Louis Primary School.  We have replaced the school’s insanitary, crumbling lavatory block with much larger, modern toilet facilities, an investment that provides much-needed health benefits for the school’s 650 young pupils.

As these before and after shots show, a mere two months’ work has made quite a difference. 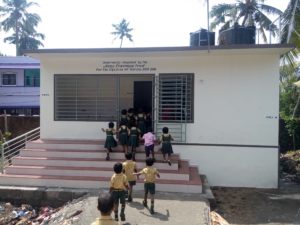 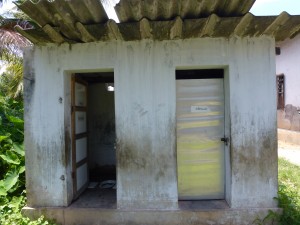 We’d like to thank Anita George, Rebecca Tennant and Richard Ames, the three Kerala managers from GVI, our partner charity, who have brilliantly project-managed all our work so far for the kids of Kerala. We could not have achieved any of this without you.