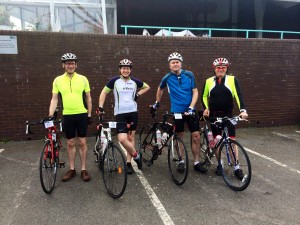 Family and friends Rob Wheal, Graham Wheal, Chris Armstrong and Graeme Fry took part in the daunting London Revolution 100-mile ride in May. They smashed their target and, with more than 100 donations, raised an impressive £3,300.

Rob, Caroline’s cousin, had described how Anna’s death had devastated the whole family and how her charity had inspired them to take on this awe-inspiring challenge.

“Well, we did it! All four of us finished the ride – myself, Chris and Graeme in just over nine hours, and Graham in nearer 11 – but he had been poorly the previous week. The ride took in beautiful Chiltern scenery, but we had to climb some pretty brutal hills to get there…” Rob