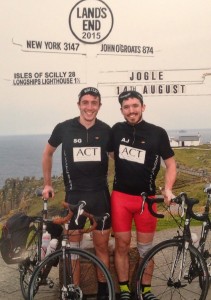 In one of the most ambitious fundraisers so far, Simon Gillespie and Alex James cycled the entire length of the UK, from John O’Groats to Land’s End. They began their adventure on a rickety tandem, but soon had to swap to bikes when “Felicity” gave up the ghost. The lads battled bravely through the elements on the gruelling 874-mile ride, and we are so grateful to them for the enormous £3,500 raised, and to their 100+ donors. Pictured are Simon and Alex in their bespoke ACT jerseys, at the triumphant end of their ride!

“The challenge was very tough, but doing it for such a great, personal cause kept us going…” Simon.

Later in the summer, Anna’s fellow languages student, Gea Mikic, ran the Bristol Half Marathon for ACT. This is an amazing achievement in itself, but even more so since Gea had originally intended to run for ACT in March, but but had fractured her leg in a snowboarding accident just weeks before. She recovered, trained hard and raised almost £500 for her run, achieved in 1hr 49. Thanks so very much to Gea for her generosity and resilience.